As the name connotes, a delicatessen is a type of eatery that sells cold cuts, cheeses, and a variety of salads. They take these freshly cut meats and cheeses to create made-to-order sandwiches that are delicous and tasty. 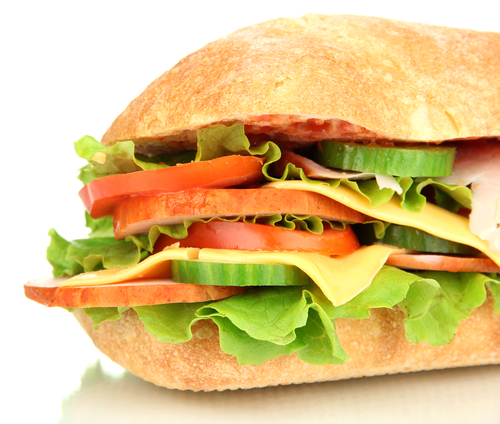 Hot items are sometimes included on a deli menu, but the majority of sandwiches and salads are served cold. Deli menus vary widely and can include any number of regional or specialty dishes as well. However, there are a few standard items that pop up on most deli menus throughout the country. Including these five deli staples on your menu is a great way to begin building you own deli menu.

The club sandwich is one of the most popular and iconic menu items served at a delicatessen. A club sandwich is prepared by using three pieces of toasted bread where each slice is filled with different types of meat, vegetables, and cheeses. Commonly, a club sandwich features turkey, chicken, ham, bacon, roast beef and even salami, with lettuce, tomato and cheese filled into the different layers. Some delis may add pickles, onions, and peppers to the sandwich, It is commonly dressed with mayonnaise, but mustard or Russina dressing may also be used, and then cut into triangles that are stacked together with toothpicks.

Soup of the Day

During the cold months of the year, many delis offer a soup of the day on their menus. This is a great way to warm your customers up and to satisfy their hot food cravings. Soups such as chicken noodle, vegetable, mushroom barley and French onion soup are always popular in delis and can be alternated on different days as needed..

Salads such as potato salad, chicken salad, and tuna salad are made by binding a variety of ingredients together with mayonnaise, salad dressing, or mustard. These "bound" or wet salads are very popular in delicatessens and can be served either as a sde dish, or, in the case of chicken or tuna salad, may be spread on slices of bread or in a wrap to form sandwiches.

There are many popular hot deli sandwiches you can offer at your deli. The French dip is a popular sandwich made with roast beef that is served hot and accompanied by a thin beef gravy known as au jus. Other traditional deli favorites include the Reuben sandiwch that features pastrami, sauerkraut and swiss on rye with Russian dressing, the hot corned beef sandwich, and the hot brisket of beef sandwich.

Popular delis will also offer some traditional side dishes to accompany their sandwiches. They include fresh cut French fries, onion rings, health salads, hummus, coleslaw and olives and pickles.The taste of the sandwich combined with the savory side dish, helps round out the deli meal, which are known to be quite filling and satisfying.

If you are starting a deli from the ground up, it's a good idea to start with these basics and then expand your menu to suit different tastes, explore new themes or localize your menu choices to fit the area you are situationed in. While these traditional deli basics may turn out to be your most popular menu items, don't be afraid to branch out to embrace new ideas and new menu options to have your customers clamoring for more at your deli.